Jaxen Report
Facebook Twitter Google+ LinkedIn StumbleUpon Tumblr Pinterest Reddit Share via Email Print
Over the recent weeks the American public has endured a constant barrage of media-manufactured hysteria surrounding the measles. The regular talking points have been on full display to create a false narrative. Andrew Wakefield created ‘anti-vaxers,’ vaccines pose no risk, the science is settled, and so on and so on. Low information reporters from multiple backgrounds and with diverse areas of interests are all freely jumping in to report their take on American measles causes. Yet few dare to stray from the wildly accepted astroturf narrative continually seen from mainstream, corporate media outlets. Author and medical research journalist Neil Z. Miller recently commented:

“I’m used to reading vaccine propaganda and usually there is a tenuous thread connected to the truth.”

However, when Miller read the Sacramento Bee’s recent article titled Measles outbreak may spread to California, doctors are warned – with risk of deafness, autism he discovered a big problem. The SacBee presented the public with the idea that there exists a risk of autism from the measles. In their opening paragraph, the SacBee story warns, “…health experts say [measles] can cause deafness and autism in its survivors.” The article goes on to state “Measles has been proved to cause intellectual and neurodevelopmental disorders, including autism, in children.” Miller commented, “I knew right away this was not measles…I’ve done enough studies on measles and knew right away that the author…was referencing something else.” How did the Sacramento Bee make their autism-measles connection? 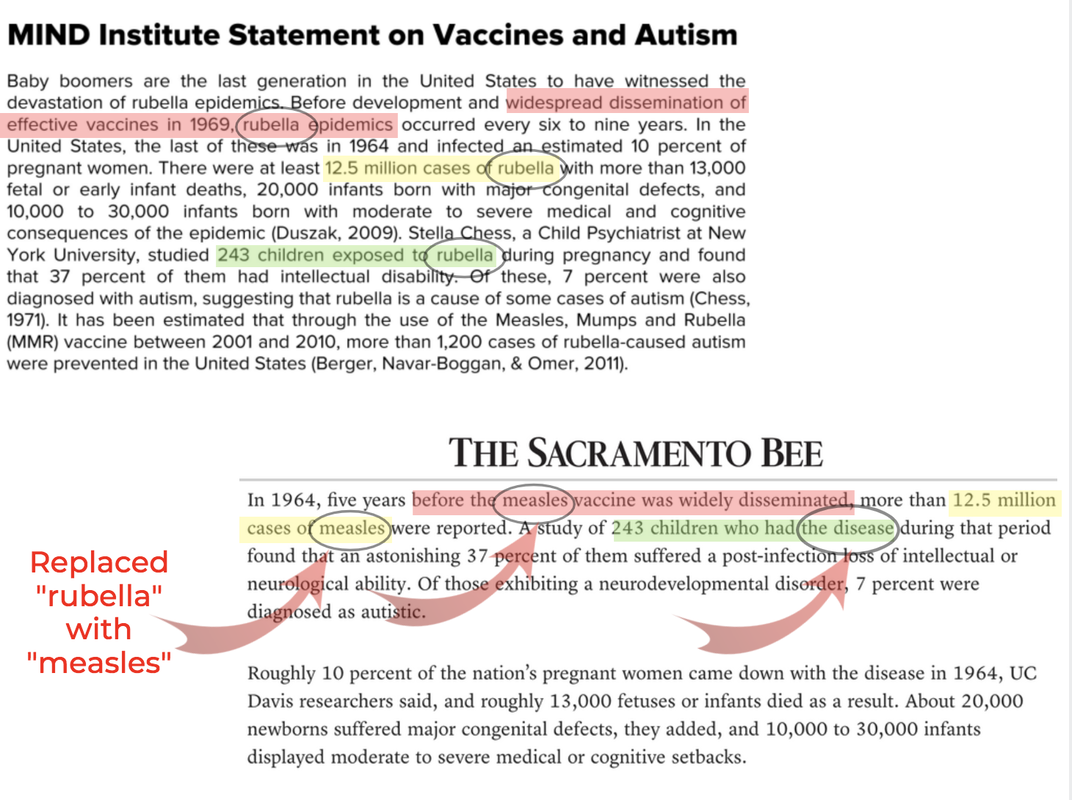 Original SacBee article compared to the research the article was quoting
​Both the SacBee article’s author, Cathie Anderson, and the outlet itself was contacted by Miller via email pointing out the errors.​ 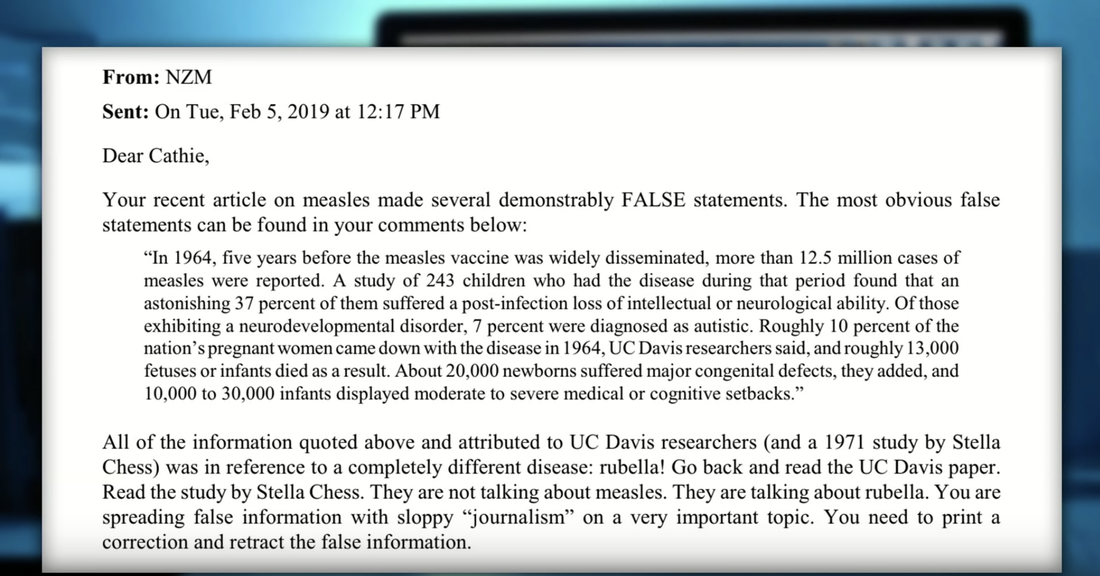 When her ‘errors’ were pointed on, Anderson decided to defend her position in her reply to Miller.

Anderson’s “clarification” in her article amounted to her removing the link to the original research, talking about rubella not measles, effectively denying her readers access to the scientific truth for the sole purpose of protecting lies.

After a final email from Miller in which he attached the studies Anderson was misrepresenting, Anderson and the SacBee finally corrected their article a full nine days after it was published. The title now reads, Measles outbreak may spread to California from other states, doctors are warned. The article now carries an editor’s note stating the following:

“This story was changed Feb. 5 to correct the name of the virus that caused neurodevelopmental and intellectual disabilities in children, cognitive issues in newborns and caused a 1964 epidemic. The illness was rubella, a virus that causes similar but less severe symptoms than measles. Rubella has been linked to autism.”

All good now right? Unfortunately, even in the SacBee’s attached editor’s note ‘correction’ there are more lies. A quick search using the internet archive tool The Wayback Machine, which catalogs all websites, address, and changes on a dated timeline, shows that as of February 11, the SacBee article’s rubella-measles lie and its title still remained the same. According to The Wayback Machine’slogged changes to the SacBee article, the Feb. 5 correction date cited by Anderson and the SacBee was yet another lie.

And for good measure, Anderson and the SacBee’s article still opens with the false sentence linking measles to autism by stating, “California’s public health officials are alerting doctors and other medical providers to be on the lookout for measles after first New York state and now nearby Washington state wrestle with a wily virus that health experts say can cause deafness and potentially autism in its survivors.”

What low information reporters and willfully deceitful medial outlets need to understand is that the public’s knowledge base concerning the truth about vaccines has greatly changed over the recent years. Meanwhile, the extremely narrow guardrails of accepted vaccine propaganda allowed by mainstream, corporate media reporting has changed little. Large bodies of science by respected global researchers pointing to issues with both vaccine safety and efficacy now exist. So do legal admissions conceding to lack of vaccine safety oversight and science by US government agencies who were tasked to do so. Simplistic talking points are losing their effect on the public consciousness and willful lies are being caught in near real time by educated readers and viewers. The longer corporate media sticks to their broken narrative, the more readers and viewers they will lose.

WHY THE FDA SHOULD STAY OUT OF THE CURRENT VACCINE DISCUSSION

Vaccine Censorship Backfiring…What to Expect Next

The 5 Biggest Scandals [so far] Of The…

DOCTOR WHO PREDICTED COVID-19 ANSWERS ALL

Pharma Whistleblower: The “Root Cause” of Opioid Epidemic Was FDA

WHY THE FDA SHOULD STAY OUT OF THE CURRENT VACCINE DISCUSSION

DOCTOR WHO PREDICTED COVID-19 ANSWERS ALL

Pharma Whistleblower: The “Root Cause” of Opioid Epidemic Was FDA